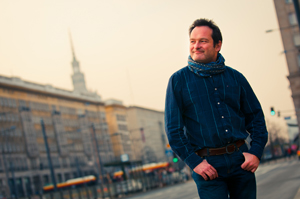 "I recently had the pleasure of performing Britten’s Lachrymae in Warsaw with the wonderful Sinfonia Varsovia. This marked the beginning of a period of exciting plans bringing me back to Poland. In August 2015 two world premieres at Warsaw’s Chopin and His Europe Festival in recital with Maciej Grzybowski: Andre Tchaikowsky’s viola sonata written in 1954 and only very recently discovered in manuscript, partnered by a newly commissioned sonata for viola and piano by the eminent Polish composer Pawel Szymanski. This performance will be repeated in other Polish cities and followed by concerts in the UK.

I have also commissioned a new work from the British composer Joseph Phibbs which I will premiere at the Hampstead Festival in London in November 2015 together with Laurene Durantel."

The Belcea Quartet has just released the fruit of our last years work: the complete Beethoven String Quartet cycle on CD in two volumes issued on the Zigzag Territoires - our new recording label.


Interview in the Gazeta Wyborcza

Krzysztof talks about his work with the Belcea Quartet, an interview recently published in the Polish newspaper Gazeta Wyborcza, (in Polish). Download Word Doc

And the band plays on

From Shostakovich's masterful “Seventh Symphony” being live-broadcast to the starving citizens of Leningrad during the German siege, to the RMS Titanic's orchestra playing as the ship went down, music and musicians have served unique and memorable roles during moments of crisis and calamity. On the night of Tuesday, November 6th, as most of the country’s eyes remained glued to television screens as the election results trickled in, the London-based Belcea Quartet carried on the tradition at the Park Slope Armory.

"The crowd grew and shouts of 'encore' - from both evacuees and rescue workers - rang through the the armory..."

Since Superstorm Sandy made its way up the eastern seaboard leaving devastation in its wake, the Armory (built in 1893 and now a YMCA) has been a refuge for upwards of 500 evacuees from Far Rockaway, one of New York City's hardest hit areas. Housing primarily lower-income seniors plucked from flood-ravaged areas in pitch blackness by National Guardsmen and Marines, the space has been transformed into a disaster relief center with long food lines, no shower facilities and scared citizens seeking solace under specially embroidered City of New York blankets. MORE 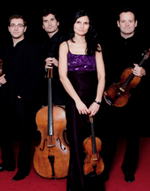 Following the 2011/2012 "Beethoven season" the Belcea Quartet returns to the concert stage with more Beethoven quartet cycles and concert series in Stockholm's Konserthuset, New York's Carnegie Hall, Vevey, Bolzano and Genova. The Belcea Quartet's complete Beethoven recordings on CD and DVD will be released in the coming season!


Belcea Quartet: The lunacy of the Fugue

An interview by Krzystztof Chorzelski for the Austrian Die Presse
about the Beethoven cycle. at the WIener Konzerthaus (2-12 May).
Read in English
Read in German

The Belcea Quartet is currently in the process of performing and recording all the Beethoven quartets. Our recordings are taking place throughout the season in the Britten Studio at Snape Maltings before a live audience. We are hoping that this way of recording Beethoven will add a "live" edge to the sound - something which we believe is vital to convey the spirit of this music. At the beginning of May the BQ will perform all of the Beethoven Quartets in our first "concentrated" cycle - with all six concerts taking place within 10 days. And to make this event even more special: our first Beethoven marathon will take place in Vienna as part of the Konzerthaus's 21st Wiener Frühlingsfestival. The concerts will be held between 2 and 12 May in the wonderful Mozartsaal and will form part of our continuing residency in this hall. There can probably be no greater honour for us than to play all the Beethoven quartets in Vienna! More

Performing live on In Tune, Radio 3

Violist Krzysztof Chorzelski and pianist Katya Apekisheva performed live in the In Tune studio on 14 March 2012 and talked to presenter Sean Rafferty about their new album together featuring the music of Schumann, Britten and Shostakovich.

On Friday 13 April 2012, I will perform Mozart's Sinfonia Concertante with the Polish violinist Piotr Prysiaznik and the Gorzow Philharmonic Orchestra conducted by Jin Suh. Piotr and I studied together with our beloved violin teacher the late Zenon Bakowski some twenty five years ago in Warsaw. It will be a great pleasure for me to reunite with my old friend. 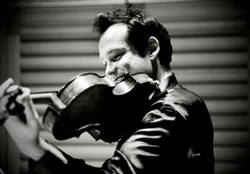 An interview with Krzysztof Chorzelski

September 2011, the Belcea musicians are in London, rehearsing for the first programme in the series, when I speak to violist Krzysztof Chorzelski. He is one of the founding members, named after leader, Corina Belcea-Fisher. His roots are in Poland, but the life of a successful musician is international, and fresh in both his mind and mine is the recent performance of Schubert's String Quintet, with Valentin Erben (ex-Alban Berg Quartet) as second cellist. The performance in July as a late-night BBC Prom was an outstanding surprise, the vast space of the Royal Albert Hall unexpectedly reflecting the scale of Schubert's hour-long meditation on life and fate. The musicians deftly adapted to the cavernous acoustic. Best of all was the total silence of the audience, not always the way of things at the Proms.

“I was extremely touched as a performer by the silence. I remember very well it was astounding for us. In the Adagio it felt as though the lights were down and nobody was there. The slow movement requires such stillness from us and if there's noise in the hall it can very often be disturbed. In fact, I noticed it because I sat in the orchestral concert [earlier] that evening and it was very noisy, the audience was very noisy and I was already thinking, fearing, what was going to happen with the Schubert Quintet.” But he needn't have worried: “it was breathtaking for us to feel the silence.”.... More