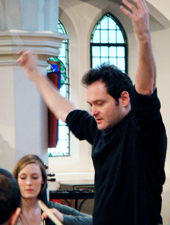 Conducting has always been of great interest to me. In 2006 I went back to the Royal College of Music to enrol as a student in Neil Thomson's conducting class. This was a very valuable experience for me which led to my first conducting concerts with an orchestra I founded and called the Metamorphosen Ensemble - composed entirely of my wonderful musician friends. The most memorable concert we played was the performance of Strauss's Metamorphosen at London's St. John's Smith Square in 2009. CD recordings with the London Serenata followed this experience as well as a very memorable summer at Dartington in 2010, where I was invited by Diego Masson to join his conducting class. This resulted in taking part in two performances of Mozart's La Nozze di Figaro - definitely the happiest conducting experience for me to date!